Written by unknow on 08 December 2008. Posted in Parenting.

Counsel Upon Parental Duty and Responsibility 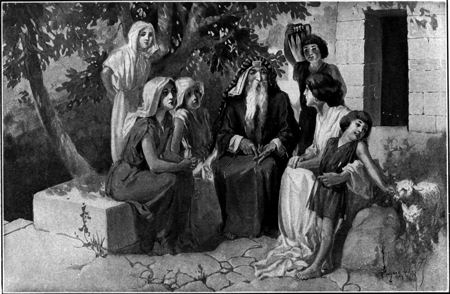 First, I remark that many err in too great severity or too great leniency of family government. Between parental tyranny and ruinous laxness of discipline there is a medium. Sometimes the father errs on one side and the mother on the other side.

Good family government is all important. Anarchy and misrule in the domestic circle is the forerunner of anarchy and misrule in the State. What a repulsive spectacle is a home without order or discipline; disobedience and impudence, anger and falsehood lifting their horrid front in the place which should be consecrated to all that is holy and peaceful and beautiful. In the attempt to avoid all this, and bring the children under proper laws and regulations, parents have sometimes carried themselves with great rigor.

The heart sickens at what you sometimes see, even in families that pretend to be Christian- perpetual scolding, and hair pulling, and ear boxing, and thumping, and stamping, and fault-finding, and teasing, until the children are vexed beyond bounds and growl in the sleeve, and pout, and rebel, and vow within themselves that in after-days they will retaliate for the cruelties practiced.

A child’s nature is too delicate to be worked on by sledgehammer and gouge and pile-driver. Such fierce lashing, instead of breaking the high mettle to bit and trace, will make it dash off the more uncontrollable. Many seem to think that children are flax- not fit to use until they have been hackled (combed to straighten) and swingled (beat with a knifelike instrument). Some one talking to a child said: “I wonder what makes that tree out there so crooked.” The child replied: “I suppose it was trod on while it was young.” 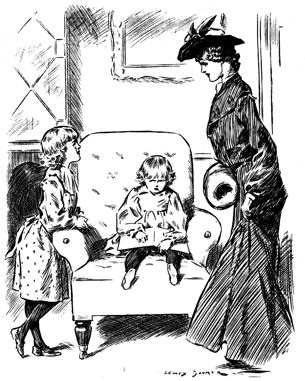 In some families all the discipline is concentrated upon one child’s head. If anything is done wrong the supposition is that “George” did it. He broke the latch. He left open the gate. He hacked the banisters. He whittled sticks on the carpets. And George shall be the scapegoat for all domestic misunderstandings and suspicions. If things get wrong in the culinary department, in comes the mother and says, angrily: “Where is George?” If business matters are perplexing at the store, in comes the father at night and says, angrily: “Where is George?” In many a household there is such a one singled out for suspicion and criticism. All the sweet flowers of his soul blasted under this perpetual northeast storm. He curses the day in which he was born. Safer is the child in an ark of bulrushes on the Nile, among crocodiles, than in an elegant mansion, amid such domestic Gorgons (terrifying Greek gods).

A mother was passing along the street one day and came up to her little child, who did not see her approach, and her child was saying to her playmate: “You good for nothing little scamp, you come right into the house this minute, or I will beat you till the skin comes off.” The mother broke in, saying: “Why, Lizzie, I am surprised to hear you talk like that to anyone!” “Oh,” said the child, “I was only playing, and he is my little boy, and I am scolding him, as you did me this morning.” Children are apt to be echoes of their parents.

Safer in a Bethlehem manger among cattle and camels, with gentle Mary to watch the little innocent, than in the most extravagant nursery over which God’s star of peace never stood. The trapper extinguishes the flames on the prairie by fighting fire with fire, but you cannot, with the fire of your own disposition, put out the fire of a child’s disposition.

Yet we may rush to the other extreme and ruin children by too great leniency. The surgeon is not unkind because, notwithstanding the resistance of his patient, he goes straight on with firm hand and unfaltering heart to take off the gangrene. Nor is the parent less affectionate and faithful because, notwithstanding all remonstrance on the part of the child, he, with the firmest discipline, advances to the cutting off of the evil inclinations. The Bible says: “Chasten thy son while there is hope, and let not thy soul spare for his crying.”

Childish rage will unchecked, after awhile, become a hurricane. Childish petulance (bad temper) will grow up into misanthropy (hatred of mankind). Childish rebellion will develop into the lawlessness of riot and sedition. If you would ruin the child, dance to his every caprice and stuff him with confectionary. Before you are aware of it that boy of six years will go down the street, a cigar in his mouth, and ready on any corner with his comrades to compare pugilistic (fist-fighting) attainments. The parent who allows the child to grow up without ever having learned the great duty of obedience and submission has prepared a cup of burning gall for his own lips and appalling destruction for his descendants. Remember Eli and his two sons, Hophni and Phinehas.

A second error prevalent in the training of children is the laying out of a theory and following it without arranging it to varieties of disposition. In every family you will find striking differences of temperament. This child is too timid, and that too bold; and this too miserly, and that too wasteful; this too inactive, and that too boisterous. Now, the farmer, who should plant corn and wheat and turnips in just the same way, then put them through one hopper and grind them in the same mill, would not be so much of a fool as the parents who would attempt to discipline and educate all their children in the same manner. It needs a skillful hand to adjust these checks and balances. The rigidity of government which is necessary to hold in this impetuous nature would utterly crush that flexible disposition, while the gentle reproof that would suffice the latter would, when used on the former, be like attempting to hold a champing Bucephalus (the horse of Alexander the Great who would submit to no other rider) with the reins of a thread. 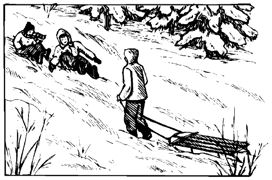 Let the Children Explore a Little

An error often committed in the training of children is the suppression of childish activity and inquisitiveness. Don’t put religion on your child as a strait-jacket. Parents, after having for a good many years been jostled about in the rough world, often lose their vivacity, and are astonished to see how their children can act so thoughtlessly of the earnest world all about them. That is a cruel parent who quenches any of the light in a child’s soul. Instead of arresting its playfulness, go forth and help him trundle the hoop, and fly the kite, and build the snow castle. Those shoulders are too little to carry a burden, that brow is too young to be wrinkled, those feet are too sprightly to go along at a funeral pace. God bless their young hearts!

Now is the time for them to be lively. Let them romp and sing and laugh, and go with a rush and a hurrah. In this way they gather up a surplus of energy for future life. For the child that walks around with a scowl, dragging his feet as though they were weights and sitting down by the hour in moping and grumbling, I prophesy a life of utter inanition (emptiness) and discontent. Hush the robins in the air till they become silent as a bat, and lecture the frisking lambs on the hillside until they walk like old sheep, rather than put exhilarant childhood in the stocks.

The Beauty of Early Piety

The present generations of men will pass off very much as they are now. Although the gospel is offered to them, the general rule is that drunkards die drunkards, thieves die thieves, and libertines die libertines. Therefore, to the youth we turn. Before they sow wild oats, get them to sow wheat and barley. You fill the bushel measure with good corn and there will be no room for husks.

Oh, for one generation of holy men and women. Shall it be the next? Fathers and mothers, you, under God, are to decide whether from your families shall go forth cowards, inebriates (drunkards), counterfeiters, blasphemers, and whether there shall be those bearing your image and carrying your name festering in the low haunts of vice, and floundering in dissipation, and making the midnight of their lives horrid with a long howl of ruin. Or shall from your family altars come the Christian, the reformers, the teachers, the ministers of Christ, the comforters of the troubled, the healers of the sick, the enactors of good laws, the founders of charitable institutions, and a great many who shall in the humbler spheres of toil and usefulness serve God and the best interests of the human race.

You cannot as parents shirk the responsibility. God has charged you with a mission, and all the thrones of heaven are waiting to see whether you will do your duty. We must not forget that it is not so much what we teach our children, as what we are in their presence. We wish them to be better than we are, but the probability is that they will only be reproductions of our own character.

There is a mysterious phenomena that occurs in the Harz Mountains of Germany known as the “Specter of Brocken”. Among these mountains travelers in certain conditions of the atmosphere see themselves copied on a gigantic scale in the clouds below them. At first the travelers do not realize that it is themselves on a larger scale. When they lift their hand or move their head they see a giant monster doing the same, and with such enlargement of proportions that the scene is most terrifying. Likewise with us, the probability is that many of our faults that we consider small and insignificant, if we do not put an end to them, will be copied on a larger scale in the lives of our children, and perhaps dilated and exaggerated into spectral proportions. You need not go as far as the Harz Mountains to see that process.

The first thing in importance in the education of our children is to make ourselves, by the grace of God, fit examples to be copied. The day will come when you must confront that child, not in the church pew on a calm Sabbath, but amid the consternation of the rising dead, and the flying heavens, and a burning world. From your side that son or daughter, bone of your bone, heart of your heart, the father’s brow his brow, the mother’s eye his eye, shall go forth to an eternal destiny. What a joy yours will be if at last you hear their feet in the same golden highway, and hear their voices in the same rapturous song, illustrations, while the eternal ages last, of what a faithful parent could, under God, accomplish!