Is God Our King or Our President?

One day I was talking with a coworker about the power of God to judge and rule the world. My coworker declared, “I think God is twisted to have destroyed the whole earth with a flood, including innocent babies.” I explained that God destroyed the world because of its great wickedness. The people had the opportunity to enter the ark and save themselves and their children, but they refused. I also said, “God will again destroy the whole world, but this time with fire, not with water.” “But God can’t do that,” my coworker cried, “this is America, the land of the free!”

Read more: Is God Our King or Our President?

Written by Dean Taylor on 31 July 2011. Posted in Church Matters.

The Cause of Division ... and the Cure

In A.D. 449, in the famous New Testament city of Ephesus, bishops from all over the world gathered to discuss what they saw as a life-or-death point of theology. The issue? They wanted to nail down just how the two natures of Christ coexisted in the person of Jesus. Fully divine and fully human, they all agreed. But that wasn’t enough. Precisely how those two natures existed in the person of Jesus was the debate. At first glance you would probably think that this must have been some fine point of theology reserved only for the elite theologians. But no … this got big.

Read more: The Cause of Division... and the Cure

Written by Mike Fisher on 26 July 2011. Posted in Church Matters.

My purpose here is to think about five distinct approaches to biblical Christianity that can be observed in conservative churches today. This short list grew out of various conversations that I have participated in. There are certainly more aspects, but in this article we will concern ourselves with these five ideas as themes, perspectives, or approaches:


Sometimes churches make their attachment to one or more of these ideas obvious. The phrase “Bible Church” is common in church names. The sign at the little country church beside my house says, “Independent, Bible-centered.” It’s fairly obvious in these cases what approach is being taken. Other times, the focus of a congregation (or person) is seen by what they talk about most in their sermons or literature. For still others, a theme is not stated, but is nevertheless made quite clear by priorities or lifestyle choices.

Written by Emanuel Lapp on 02 May 2011. Posted in Church Matters.

Legalism - Its Fruits and the True Grace of God

When one speaks of legalism, it is necessary to define the term. The word “legalism” is not found in the Bible. There are a few things that bother me about how this word has been used many times, and this has been one of the stimulations that caused me to study it. To start with, let’s look at three points:

Read more: Legalism - Its Fruits and the True Grace of God

Written by Mike McDaniel on 10 March 2011. Posted in Church Matters.

We will borrow from John Bunyan’s literary practice of personifying human characteristics and give names to some familiar faces. First is the act of fretting—we will call him Mr. Worry. Do you ever worry about things that have happened, or might yet happen in the future? Or perhaps, about some upcoming event or meeting? Do you worry and fret over business or the poor economy or the political system? There seems to be no end to things to worry about. I remember the old phrase “Don’t go borrowing trouble!”

Written by Dean Taylor on 08 March 2011. Posted in Church Matters.

I think one can sum up one of the root problems of the modern Evangelical concept of the church with a single trip to Burger King. I’m envisioning the one off the turnpike on the way to Harrisburg, Pennsylvania. It’s a big one. It is made of big stones and has a nice, high, cathedral-like ceiling. If it’s your misfortune to eat there, after you pay your small fortune and sit down with your family at one of those little tables, take a minute and look around. It kind of reminds me of a modern American church.

Key Differences Between Evangelicals and Anabaptists

Evangelicals have more influence on Anabaptists in the United States than any other Christian group. Because they believe exactly the same as the Anabaptists on issues such as the authority of Scripture, we feel a certain kinship to them and desire to minimize our differences. When Anabaptists need Bible study resources, they turn to Evangelical books and commentaries. Many Christian radio stations are operated by Evangelicals, and many Anabaptists who have radios, tape players, or CD players tune in and listen to Evangelical teaching and music. This Evangelical influence has a tendency to erode the distinctive beliefs of many Anabaptists even more than physical persecution did in Reformation days.

Written by Michael McDaniel on 29 June 2010. Posted in Church Matters. 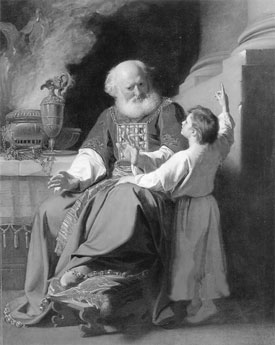 To refresh your memory of the story of the child Samuel and Eli (which is not printed here for the sake of space), please read 1 Samuel 3:1-19. In our text, young Samuel had every right to be afraid to tell Eli about the Lord’s judgment. Eli’s wicked sons profaned the temple and were not restrained by Eli. Because of this lack of restraint, God made an oath to bring calamity upon his house. These were certainly harsh words for young Samuel to relate. Notice the wording in verse 15: “And Samuel lay until the morning, and opened the doors of the house of the LORD. And Samuel feared to shew Eli the vision.” I tend to think he didn’t sleep very much—if at all—that night, after receiving this revelation from God. Perhaps he tossed and turned, worrying about what God told him to do. I began to ponder that a bit, as it relates to our telling one another the “hard things.” Are we afraid to tell our brother or sister things which the Lord has revealed to us about them? It may not be from a dream or a vision, but it is definitely something that God has revealed through the Word, experience, or observation.

Many times things are very clear to us ... we know we should say something to others, but we “fear telling Eli” about … a character flaw that could hinder their growth; mannerisms or sinful habits that distance them from their brethren, their children, or their wife; sayings that are not becoming of a Christian (e.g., slang, soft curse words); actions that do not show forth Christ in the community and that damage the witness of the church; words that have hurt and have “separated very friends” (e.g., critical, judgmental remarks); foolish jesting; lack of parental guidance of their children; worldliness, materialism, covetousness, and debt; dishonesty; lack of submission by a wife or daughter; immodesty of dress and tendency toward the world’s fashions; improper music; lack of zeal for the Lord …

Written by Denny Kenaston on 05 April 2010. Posted in Church Matters.

Based on a sermon preached by Denny Kenaston, June 1991

“Antigroupism” is a broad word. One can place a multitude of names in place of “groupism,” but the goal of this article is to reveal the dangers that are lurking around anyone who has an antigroup attitude towards some church group in their past, or perhaps a church group around them. We are dealing with the attitude in this article, in a general way. You, the reader, need to make the application wherever the specific fits. We could say, for example, that we are concerned about the danger of anti-Amishism. Or, we could say, we are concerned about the danger of anti-Baptistism or anti-Pentecostalism.

Read more: The Dangers of Antigroupism