Written by John Bunyan on 08 December 2008. Posted in Book reviews.

The Progressing Faith of John Bunyan 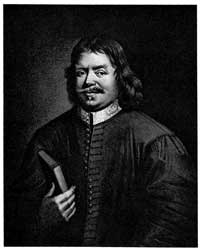 The Author of Pilgrim’s Progress

John Bunyan was brought up by his father in the craft of a brass worker. Although he was never a drunkard or a violent man, his special sins were profanity, Sabbath-breaking, and atheism.

Before he was converted, he was notorious for the energy that he put into all his doings. He had a zeal for idle play and an enthusiasm in mischief that perversely manifested his forceful personality.

His biographer, Dr. Hamilton, gives the following description of Bunyan in his youth:

He is the noisiest of the party playing pitch-and-toss—that one with the shaggy eyebrows whose entire soul is ascending in the twirling penny. His energetic movements and authoritative exclamations identify him at once as a ringleader.
The penny has come down on the wrong side, and a loud oath at once bellows from young Bunyan. You have only to remember that it is Sabbath evening, and you witness a scene often repeated on Elstow Green two hundred years ago.

The only restraining influence that Bunyan then felt was the power of terror. He was often depressed by fear of the impending wrath of God, and he frequently had terrible nightmares that the reckless diversions of his waking day could not always dispel. He would dream that the last day had come and that the quaking earth was opening its mouth to let him down to hell. Or he would find himself in the grasp of fiends who were dragging him away.

As he grew older, his conscience grew harder. He experienced some remarkable escapes from death, but these providences neither startled nor melted him. He married very early, and his wife was the daughter of a godly man. Her whole property consisted of two small books, The Plain Man’s Pathway to Heaven, and Practice of Piety, which her father had left her on his deathbed.

Young Bunyan read these books, and his wife often told him what a good man her father had been. The consequence was that he felt some desire to reform his vicious life, and he began to attend church twice a day. At the same time, he became overrun with a spirit of superstition. The mere sight of a priest bewitched him. However, while enamored with the garb and ritual of worship, Bunyan continued to curse and blaspheme and to spend his Sabbaths in the same riot as before.

One day, however, he heard a sermon on the sin of Sabbath-breaking, and it haunted his conscience throughout the day. When he was in the midst of the excitement of that afternoon’s diversions, a voice seemed to dart from heaven into his soul, “Wilt thou leave thy sins and go to heaven, or have thy sins and go to hell?” His arm, which was about to strike a ball, was stopped, and as he looked up to heaven, it seemed as if the Lord Jesus was looking down upon him in rebuke and deep displeasure.

At the same time, he was overcome with the conviction that he had sinned so long that repentance was now too late. His desperate conclusion was that he was beyond hope. In fact, he became so persuaded that he had forfeited heaven forever that he decided to enjoy the pleasures of sin as rapidly and intensely as possible. One day, as Bunyan was standing at a neighbor’s window cursing and swearing, the woman of the house protested that he was the ungodliest man that she had ever known in her life. Because the woman was herself a notoriously worthless character, her reproof had a dramatic effect on Bunyan’s mind. He was silenced in a moment. However, his swearing had become so habitual that he thought reform was impossible without returning to childhood and relearning how to speak.

Soon after this circumstance, Bunyan began to read the Bible. He took a special interest in the historical portions of the Scripture, and his outward life underwent much reformation. His own account of this period of his life says:

”I did set the commandments before me for my way to heaven and I strived to keep them. I thought I kept them pretty well sometimes which would bring me comfort. Yet now and then I would break one, and so afflict my conscience. I would repent and promise God to do better next time. I then thought I pleased God as well as any man in England. Thus I continued about a year and all my neighbors considered me to be a very godly man, a new and religious man, and did marvel much to see such great alterations in my life and manners. And so it was although I knew not Christ, nor grace, nor faith, nor hope. I was nothing but a poor painted hypocrite, yet I loved to be talked of as one that was truly godly.”

About a year later, Bunyan went to Bedford on business. While walking along the street, he noticed a few poor women sitting in a doorway and talking together. Their conversation surprised him. Although he had by this time become a great talker on sacred subjects, their themes were far beyond his reach. They spoke in a personal and vital way about God’s work in their souls, the views they had obtained of their sinfulness and of God’s love in Christ Jesus, and the words and promises that had particularly refreshed them and strengthened them against the temptations of Satan.

Bunyan felt as if these women had found a new world. Their conversation made a deep impression on his mind. He saw that there was something real in religion that he had not yet understood. What John Bunyan heard in the society of these humble instructors suggested to him a sort of waking vision:

”I saw as if they were on the sunny side of some high mountain, there refreshing themselves with the pleasant beams of the sun, while I was shivering and shrinking in the cold, afflicted with frost, snow, and dark clouds. Between them and me, I saw a wall through which my soul did greatly desire to pass, but I could not find a passage. At the last I saw, as it were, a narrow gap, like a little doorway in the wall, through which I attempted to pass. After great striving, I pushed my body through. It showed me that none could enter into life but those who were in downright earnest, and unless they left that wicked world behind them, for here was only room for body and soul, but not for body and soul and sin.”

In quest of faith he went on a long and joyless journey and was wearied with the greatness of the way. There is scarcely a fear that can assail an inquiring spirit that did not at some stage of his progress arrest his mind. He was no longer a proud Pharisee but a deeply humbled sinner: “My original and inward pollution—that was my plague and affliction. I was more loathsome in my own eyes than a toad; and I thought I was so in God’s eyes too.”

His happiness was now as intense as his misery had been. He wished he was old that he might die quickly and go to be with Christ. But another period of fearful agony awaited him, and like the last, it continued for a year. The trial that beset him was a diabolical temptation to exchange Christ for the things of this life. The words “Sell Him, sell Him” would be impressed upon his thoughts for weeks at a time.

During this period, the tempter would not let him eat his food in quiet but flooded his mind with the notion that if he did not immediately leave the table in order to pray, he would displease God. When he refused to give in to this temptation, his conscience accused him of loving his food more than God. The fear that he had committed the unpardonable sin had such an effect on Bunyan that it not only distressed his mind but gave him severe stomach disorders.

Thus his mind continued for years, “hanging,” as he expressed it, “as in a pair of scales; sometimes up and sometimes down: now in peace, and again in terror.”

Now he was loosed from his afflictions and his irons. His temptations also fled away, and he went home rejoicing for the grace and love of God. The words “He is made of God unto us wisdom, and righteousness, and sanctification, and redemption” (see 1 Cor. 1:30) became the blessed truth that was his peace with God. He was complete in Christ Jesus, and although he was sometimes interrupted by disquieting thoughts and strong temptations, his subsequent Christian experience was one of growing comfort and prevailing peace.