Written by Pablo Yoder on 05 January 2011. Posted in Missions. 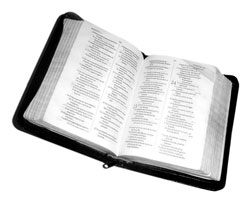 Give to every man that asketh of thee; and of him that taketh away thy goods ask them not again.
Luke 6:30

What sweet words for a missionary to hear!

But a bit of irony mixed itself into the drama on this occasion. The man asking for the Bible wanted a specific Bible, the one he had seen upstairs on the desk, the one with the black zipper. And that was Rosa Shrock’s personal Bible.

Her husband Tim kindly pointed to another Bible lying on a nearby table. “That’s my wife’s Bible upstairs, but you can have this one. Or if you’d like, Pablo has new ones at his house.”

“No,” the man insisted, “I want that one upstairs. Ask your wife if I can have it.”

Tim fetched the Bible and was ready to hand it over when the man suddenly set forth a condition: “I want to know if your wife is giving her Bible because she really wants to, or if she feels obligated. If she is not really willing, I will not take it.”

“Rosa,” Tim asked his wife, “do you give your Bible willingly?”

Does that sound like the sweet little missionary wife’s natural response to a poor beggar who happened to take a liking to her black-zippered Bible? Well, the man asking for the Bible wasn’t exactly a beggar. In fact, he was an gun-toting robber!

The episode began that fateful evening when several men showed up at Pablo Yoder’s house asking for food … and money. After giving them several pounds of cheese and some bread and all the money in the house, the robbers demanded to go to their neighbor Tim Shrock and make a collection there. After gathering his money and picking through his things—and taking the black Bible—they returned to Pablo’s house. Here they threatened to kidnap Tim if more money was not given. Pablo and Tim explained that they didn’t have any more money at the house, and that mission policy was to never pay a ransom.[1] Somewhat frustrated, they searched Pablo’s house. Then they left. But not before Pablo had served them some hot coffee and Rosa had contributed a freshly-baked cake.

The story of that donated Bible did NOT end there. More than a decade passed before the rest of the story came to light. Pablo recently wrote the following:

I am still almost trembling ... my heart has swelled to dangerous proportions ... and my spirit soars!

I just got finished having a two-hour interview with one of our worst Kusulí[2] robbers. He was converted a year ago, and agreed to give me his testimony for the upcoming book. He even agrees that I use his name openly in the book, because he has nothing to hide anymore since he is a Christian. Now I know his name is Alexis Castellón Lopez. He is an ex-murderer, kidnapper, and big-time assaulter. He’s a man we have prayed for, for years. Thirteen years to be exact.

He is the robber that asked for Rosa’s Bible the night that we were supposed to be kidnapped. Omar, the robber leader needed money to go to the US as a wetback and planned to kidnap foreigners until he had enough dough. (The same group kidnapped a European Union man two weeks later, and this man’s bosom friend was shot and killed. Read the story called “Lost Opportunities” in the book Angels in the Night. Alexis was the tall, skinny robber that was the spokesman that whole evening.) When he asked for the Bible, he made it clear that it had to be a gift. If it was not given gladly, he would not take it. Rosa emptied out her personal things and gave it to him gladly. Tim put his hand on his shoulder and witnessed to him and told him that the Bible has power to save. He answered, “I am not a Christian now, but someday I just might be one.”

The night of this robbery, Alexis admits that something held him back. He was the fearless type that assaulted at the drop of a hat. But that night, as he approached our house, AK machine gun in hand, fear gripped him. Though he didn’t know us, the leader of the band did and had warned the bandits, “We are going to get dollars from them gringos [white foreigners]. But no one lift a finger against them. They are God’s people.”

Alexis remembered those words and backed off. He went back to the leader and begged to drop the robbery. He didn’t know what held him back, but admits that it was mostly fear. The leader rebuked and ridiculed him, so he tried again. Just as he stepped out from behind our rancho to yell for me to open up the house, fear hit him again. He says that he looked up into the starry heavens and his chest was tight and he felt as if he couldn’t breathe. But he forced himself to yell. And our fourteenth robbery was under way.

So near they didn’t hit us that night! But since I know what I do now, I praise the Lord that they did. If not, Rosa’s Bible would have never found its way into the awful “Perrera”!

Two months later this man was caught and stuck in jail. He carried the Bible with him to the “Perrera” (Dog cage) jail in Matagalpa. There, the Bible was used mightily by God to save souls. Though this man himself was not converted during that time, God used the Bible in a mighty way. In the two months and 23 days he was there, 47 men were converted in his cell alone. The Bible was passed from cell to cell, and every day you could hear someone preaching with it. He tells how some extremely wicked men were converted during that time. (I will save these testimonies for the upcoming book!)

When Alexis left the jail, the cell mates begged him to leave the Bible with them. By then the third converted man was using it to preach to his cell mates. So he left the Bible, and the saga of the Book goes on, and only God knows what all has happened since, or where that anointed Bible ended up.

Especially Rosa prayed for weeks and months and years for this Bible. (We all did.) That’s why this Bible was especially anointed. It was given as a gift to a robber during intense suffering and went out bathed in prayer.

Pablo (left) gives the man who
terrorized his family a tearful hug.

Alexis hit us the second time because two of his buddies asked him to go back with them. Drugged and desperate, they came back for cash to buy drugs. At one point in the robbery, he asked me to open the bedroom where the family was hiding. He wanted to see a typewriter that I had in that room. For the first time, he saw my family. He says that the sacred scene hit him so hard that he wanted the robbery over with fast. Minutes later they were gone.

Euni [Pablo’s wife] and the children sitting there on the bed did the job. We remember that he had rudely shown the flashlight into the family’s faces. The other robber didn’t. But when he saw my wife and children, sitting there, heads bowed in fear and reverence, it struck him to the core. He went home and the next day, even as a sinner, he knelt down and begged God for forgiveness. He asked God to please not punish him for what he had done. And brethren, according to the rest of the stories in this upcoming book, that’s probably the reason he is alive today. That, and because God knew that he would be converted and that his testimony would be useful to save more souls!

At the end of the interview I told this man that I had forgiven him thirteen years ago. But I wanted to do two things to prove to him that I was genuine. I gave him a hug, and we wept in each other’s arms. Then I gave him a money gift. That brought a fresh set of tears from him. He in turn, asked my wife and me for forgiveness in the Name that is above all names. ~

Give, and it shall be given unto you; good measure, pressed down, and shaken together, and running over, shall men give into your bosom. For with the same measure that ye mete withal it shall be measured to you again. Lu. 6:38

[1] This is the policy of many missions. If a missionary is kidnapped and a ransom is paid to release him/her, it is very likely that it will be a continuous thing; an easy source of income for the kidnappers whenever they need more funds. But if the first one is denied his demand, they will be discouraged from trying it again.

[2] Kusulí, Nicaragua, where Pablo lived when the robbery occurred.