Written by Leonard Ravenhill on 03 December 2008. Posted in Church Matters.

Picture of a Prophet 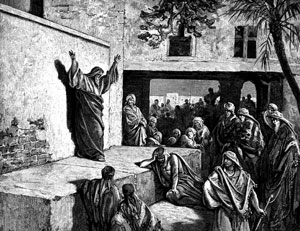 The prophet in his day is fully accepted of God and totally rejected by men.

Years back, Dr. Gregory Mantle was right when he said, “No man can be fully accepted until he is totally rejected.” The prophet of the Lord is aware of both these experiences. They are his “brand name.”

The group, challenged by the prophet because they are smug and comfortably insulated from a perishing world in their warm but untested theology, is not likely to vote him “Man of the Year” when he refers to them as habituates of the synagogue of Satan!

The prophet comes to set up that which is upset. His work is to call into line those who are out of line! He is unpopular because he opposes the popular in morality and spirituality. In a day of faceless politicians and voiceless preachers, there is not a more urgent national need than that we cry to God for a prophet! The function of the prophet, as Austin Sparks once said, “has almost always been that of recovery.”

The prophet is God’s detective seeking for a lost treasure. The degree of his effectiveness is determined by his measure of unpopularity.

He does not know compromise.

He has no price tags.

He is totally “otherworldly.”

He is unquestionably controversial and unpardonably hostile.

He marches to another drummer!

He breathes the rarefied air of inspiration.

He is a “seer” who comes to lead the blind.

He lives in the heights of God and comes into the valley with a “thus saith the Lord.”

He shares some of the foreknowledge of God and so is aware of impending judgment.

He lives in “splendid isolation.”

He is forthright and outright, but claims not birthright.

His prophecies are parried.

His truth brings torment, but his voice is never void.

He is the villain of today and the hero of tomorrow.

He is excommunicated while alive and exalted when dead!

He is a schoolmaster to bring us to Christ, but few “make the grade” in his class.

He is friendless while living and famous when dead.

He is against the establishment in ministry, then he is established as a saint by posterity.

He eats daily the bread of affliction while he ministers, but he feeds the Bread of Life to those who listen.

He walks before men for days but has walked before God for years.

He is a scourge to the nation before he is scourged by the nation.

He announces, pronounces, and denounces!

He has a heart like a volcano and his words are as fire.

He talks to men about God.

He carries the lamp of truth amongst heretics while he is lampooned by men.

He faces God before he faces men, but he is self-effacing.

He hides with God in the secret place, but he has nothing to hide in the marketplace.

He is naturally sensitive but supernaturally spiritual.

He has passion, purpose and pugnacity.

He is ordained of God but disdained by men.

Our national need at this hour is not that the dollar recovers its strength, or that we save face over the Watergate affair, or that we find the answer to the ecology problem. We need a God-sent prophet!

I am bombarded with talk or letters about the coming shortages in our national life: bread, fuel, and energy. I read between the lines from people not practiced in scaring folk. They feel that the “seven years of plenty” are over for us. The “seven years of famine” are ahead. But the greatest famine of all in this nation at this given moment is a famine of the hearing of the Word of God (Amos 8:11).

Millions have been spent on evangelism in the last twenty-five years. Hundreds of gospel messages streak through the air over the nation every day. Crusades have been held; healing meetings have made a vital contribution. “Come-outers” have “come out” and settled, too, without a nation-shaking revival. Organizers we have. Skilled preachers abound. Multi-million dollar Christian organizations straddle the nation. BUT where, oh where, is the prophet? Where are the incandescent men fresh from the holy place? Where is the Moses to plead in fasting before the holiness of the Lord for our moldy morality, our political perfidy, and sour and sick spirituality?

God’s men are in hiding until the day of their showing forth. They will come. The prophet is violated during his ministry, but he is vindicated by history.

There is a terrible vacuum in evangelical Christianity today. The missing person in our ranks is the prophet, the man with a terrible earnestness, the man totally otherworldly. He is the man rejected by other men, even other good men, because they consider him too austere, too severely committed, too negative and unsociable.

Let him be as plain as John the Baptist.

Let him for a season be a voice crying in the wilderness of modern theology and stagnant “churchianity.”

Let him be as selfless as Paul the apostle.

Let him say nothing that will draw men to himself but only that which will move men to God.

Let him come daily from the throne room of a holy God, the place where he has received the order of the day.

Let him, under God, unstop the ears of the millions who are deaf through the clatter of shekels milked from the hour of material mesmerism.

God send us this Moses to lead us from the wilderness of crass materialism, where the rattlesnakes of lust bite us and where the enlightened men, totally blind spiritually, lead us to an ever-nearing Armageddon.

God have mercy! Send us prophets!