Leadership Seminar 2008
Brotherhood and Fatherhood, all for the Lord Jesus

We planned and prayed and prepared for Leadership Seminar this year with lots of expectation. We converted our office into a bedroom to house our guests, and made the necessary preparations at work and at home to have the week off.

But most of all we prepared our hearts to meet with God. I think the part that I was looking forward to the most was the opportunity to set aside all the distractions of our busy schedules and (most of) our responsibilities, and devote a whole week to spend in the presence of God. My prayer was to receive a fresh vision and direction from God. I knew that I was not experiencing in my daily life even half of the beautiful things God has promised to the believer in His Word. I made a commitment before the week began that I would not hold anything back from God that He asked of me. It did give me a little apprehension to say this, but I knew that this is the only way that God can do anything to change us.

The week began with all of us meeting together Sunday morning for worship. David Cooper illustrated to us our ability to have a heart-to-heart relationship with God. It is our privilege to learn to know the very seat of God’s emotions and desires. No other religion views their god in this way. Most other religions see God as distant and removed from His people, with no real concern or love for each individual. Yet most Christians go through their entire lives never putting forth the effort to find out who God really is.

This message somewhat set the tone for my week, as God gave me a great desire to get to know Christ in a real way, not just look like a good Christian. And I could tell that there were many more men who had the same vision. In the mornings as we arrived, at our breaks, over the meals, and in our prayer groups, the conversations centered around Jesus Christ. In fact, I went the whole week without once hearing anything about the Super Bowl, and at the end of the week I still did not know who had won, nor did I care. 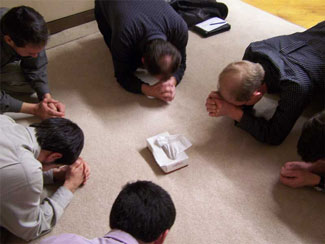 I think my favorite part of the whole week was the time we spent in our prayer groups. Every afternoon we divided into groups of approximately nine men each for prayer and sharing. It is so amazing how after five days of praying together for an hour and a half each day, I felt a closer bond to those men than to some friends whom I have known for years. We also had the thrill of watching a young man in our prayer group turn his life around. When I met him Monday, he was confused. He was sure he was a Christian, yet he did not have peace and was very distraught over all the sin he had allowed to come into his life. On Wednesday, with a glowing face, he told me that he found what it meant to be truly born again. Hallelujah! Jesus Christ is still changing lives!

That evening during the service the preacher mentioned that the apostles always baptized someone immediately when they believed in Christ. He went on to say that if you don’t want to be baptized or think it has to be this perfect little ceremony at just the right time and place, he wonders if you are truly born again. That night this young man found the man who had led him to Christ and the one who preached that evening and asked to be baptized. After discussing it with him and praying together he still was convinced that this is what God wanted him to do. So Wednesday night, at 11:30 PM, he was baptized in the cold water of Cocalico Creek, officially giving up his position in the US Army to become a soldier in the army of the Lord Jesus Christ.

In this prayer group I also discovered the power of confession of sin. The one night God convicted me that I needed to confess a particular sin that I had been hiding. Although I was very humiliated, I shared this with my prayer group. I was so amazed at what happened next. No one condemned me, but rather they all encouraged me. And then it was like a wall had crumbled, and we all shared hurts and failures that we had in our lives, and there were issues that had been buried for years that were brought up and dealt with. If it were not for the blood of Jesus Christ, where could we go to have our sins forgiven?!

Several men commented on the spirit of brokenness that was felt throughout the week. Every evening it seemed the altars were full, and even during the day or in the middle of sermons it was not uncommon for men to come forward weeping and making things right with God. Sometimes it is disturbing when people admit who they really are and what they have done; and you wonder how these things could have possibly happened. But it is so exciting to know that as we repent of our sins, God is always willing not only to forgive but also to break the power of sin over us. 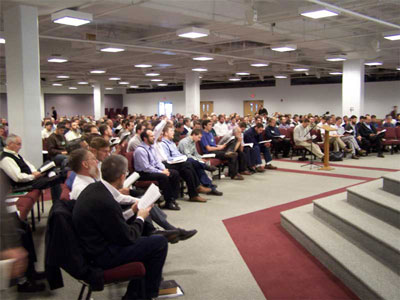 Denny Kenaston preached the first sessions each day on the subject of “The Incomparable Christ; A Study in Christ-Centered Theology.” This awesome subject is inexhaustible. Bro. Denny said that with a subject like this he knows he cannot go wrong. Is it not awesome that all of history points to Christ and all future will also point to Christ? Jesus Christ is the reason I am writing this and the reason you are reading this. One thing I had never thought of before was how God took men like Mao Tsedung who were determined to destroy all religion and used them to create an emptiness in people’s lives so that today Christ is being glorified in China. Christ must be the central motive for everything we do. Christ not only is our God and Creator, but He is also our perfect example of humility, love, patience, submission, etc. Christ expected us to follow His example as a missionary, and He promised, “Follow Me and I will make you fishers of men”.

If we are not fishers of men, can we be followers of Jesus? I was challenged to keep Christ my focus, even in the practical or little things. If Jesus Christ does not change your life, then you are not serving the Jesus of the Bible.

Mose Stoltzfus preached on “The Value of the Church in the Believer’s Life.” This session was full of practical applications and biblical principles for the local church. I would recommend that each Remnant or conservative church get a set and listen to it. Mose was very practical in describing Christ’s plan for His church. In a land of individualism, pride, and affluence, the church is under attack like never before. Many of us have come out of churches where apostasy was rampant. As a result we can react from these situations and hold everyone suspect who disagrees with us. We were shown how we can thwart God’s plans and cheat ourselves and our families when we do not find a fellowship of believers that we can be a part of.

Jesus Christ has said that His fan is in His hand and He will thoroughly purge His floor (speaking of the method used in His time to separate wheat kernels from the plant). Throughout church history, Christ has allowed either persecution or false doctrines to come into the church to weed out the false ones and prepare for Himself a pure church. May God give us the wisdom to be able to surrender our good ideas, but resist false teachings. This will and can happen only when we are totally surrendered to Christ.

As a young father, I took special interest in Rick Leibee’s teachings on “Fathers and Sons: A Holy Journey”. I know how difficult it can be training young children, and Bro. Rick said the first 12 years are only a warm-up for the teen years. I pray that many more fathers would catch the vision of this man. This has been so heartbreaking to watch the laziness men have in their relationships with their families. Too many Christian men put much effort into their careers or ministry, but then they “hope” that their children will turn out all right without putting forth the effort it takes to make it happen.

I was convicted of my own failures as a parent, but also encouraged as he illustrated some of the beautiful things that we can give our children. While many of us spent years undoing the damage sin has done in our lives, our children will never have to face some of those battles. And the battles they are facing as they grow from children into men can be won much more easily if the father stands beside his son and fights the battle with him. Don’t give up!

The whole week was a tremendous blessing to our family. The one evening, as we joined in singing with people from all across the continent and as far away as South Africa, I had to think that this might be the closest we will get to heaven here on earth. There we will also be joining in with so many others, singing praises to our Redeemer with all our hearts. My prayer for each family and church represented at Leadership Seminar is that it would not be just an exciting week, but a life-changing experience that would bring revival to this country and throughout the world and last throughout eternity.