Key Differences Between Evangelicals and Anabaptists

Evangelicals have more influence on Anabaptists in the United States than any other Christian group. Because they believe exactly the same as the Anabaptists on issues such as the authority of Scripture, we feel a certain kinship to them and desire to minimize our differences. When Anabaptists need Bible study resources, they turn to Evangelical books and commentaries. Many Christian radio stations are operated by Evangelicals, and many Anabaptists who have radios, tape players, or CD players tune in and listen to Evangelical teaching and music. This Evangelical influence has a tendency to erode the distinctive beliefs of many Anabaptists even more than physical persecution did in Reformation days.

What are some of the distinctive beliefs of Anabaptists?

One difference—and perhaps the only difference many Anabaptists would mention—is their belief in nonresistance, which most Evangelicals do not hold. Although this visible divergence is a significant difference, it springs from deeper doctrinal differences. The most basic of these differences lies in the interpretation of Scripture. Although both groups believe in the authority of Scripture, and would even use similar methods to interpret Scripture, Anabaptists approach the Bible with some different presuppositions that lead to vastly different outcomes.

Have you ever looked through a pair of binoculars or a telescope backwards? When you do, the subject that you are trying to look at, instead of appearing closer, actually appears far away. The Evangelical way of reading the New Testament can be a bit that way. In modern Evangelical theology, the teachings of Christ have taken a remarkably minor perspective—they are seen as if they are “far away,” like looking at them through a binoculars backwards. Evangelicals talk about Christ, but actually becoming a “follower of Christ”—actually doing what He taught—seems almost irrelevant.

Both Anabaptists and Evangelicals believe that every word of Paul and Christ are the inspired words of God. The question is this: do we read Paul as leading us to Christ, or do we read Christ as leading us to Paul. Jesus told us that when the Holy Spirit would come, “he shall testify of me.” Jesus also said that “Every one that is of the truth heareth my voice.”

I’ll give you a quick test to discover which way your binoculars are pointing when you look at Jesus. Go read the teachings of Jesus, and pretend for a minute that He actually meant them. If after you read them you find that they seem a bit imaginary, irrelevant, unnecessary, or even legalistic … turn your binoculars around, and by grace through faith allow the way of Jesus to change your life! ~DT 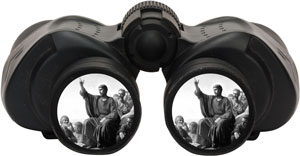 Moving from Bible interpretation, another root difference between Anabaptists and Evangelical Protestants is their view of salvation. Anabaptists emphasize that salvation is by grace through faith that works (notice it’s not faith plus works.). They believe that at conversion God purges a person’s past sins by Christ’s blood and changes that person at his very core, freeing him from the enslavement of sin and enabling him actually to live a righteous life. God declares the sinner righteous because of Christ’s work on the cross and his present work in the heart of the believer enabling him to live righteously in reality.[1] Right living is therefore crucial evidence that an individual has repented, believed, and yielded to Christ.

This is in contrast to the Evangelical view that justification is the result only of an accounting procedure in the books of Heaven that happens totally outside the person. According to this view, when a person says the sinner’s prayer, his sins are deducted from his account, and Christ’s righteousness is credited to his account instead. Thus, when God looks at the person, all He will ever see is Christ’s righteousness, regardless of how the person lives (or dies). God supposedly declares the sinner righteous no matter what is true in reality. In this view, right living should follow conversion. However, right living is completely unrelated to God’s evaluation of the person and will affect only his rewards.

Evangelicals see a huge, oversized cross on top of Scripture that obscures Christ’s call to discipleship and renders obedience unnecessary. Anabaptists, on the other hand, see no distinction in the Bible between a disciple of Christ and a saved person. As Milo Zehr wrote, “Protestants believe Christ did enough on the cross to deliver those who believe from the guilt of original sin, and Anabaptists believe Christ is doing enough day by day to deliver people from both the guilt and practice of sin.”

The Evangelical view of salvation leads to careless living in many cases. For example, the divorce rate among “Christians” in America is nearly equal to that among non-Christians. Is this not a small window giving a view of something seriously wrong within popular “Christianity”? Because of their view of salvation, most Evangelical Christians see no advantage to living a holy life.

I need to clarify that Anabaptists do not believe a person is totally perfected at conversion. According to 1 John 1:7, “If we walk in the light … the blood of Jesus Christ his Son cleanseth us from all sin.” If we walk in the light perfectly, we do not need cleansing from sin, so John apparently believed a person walking in the light may still stumble at times and need cleansing. The two false beliefs that we must avoid are these: (1) We are incapable of sinning after conversion. (2) We can willfully sin and maintain fellowship with God. The cleansing of sin does depend on our walking in the light, which I understand to mean striving to obey Christ and do what we understand is right.

The Bible says Noah, Abraham, and Job were righteous in the sight of God. Yet we know they weren’t perfected. We also know that their righteousness was not the result of an accounting transaction in the books of Heaven, but rather a righteousness (right living, or doing what is upright) that was a basic pattern in their life. What kind of affront to Satan would it have been if Job’s righteousness had been just the result of bookkeeping in Heaven?

Another difference regarding salvation is the status of children. Although Anabaptists are diligent in teaching children the word of God, their focus is not on converting the child “as soon as possible.” They believe their children are safe and innocent until they reach the age of accountability,[2] at which time the child will choose discipleship or self-will.

Evangelicals believe children are lost until they “accept Christ.” Their focus, therefore, is on getting the child “saved.” Many of their children will say the sinner’s prayer by the age of seven. To me, child evangelism does not differ much from infant baptism. I think I could get most 3-year-olds to say a prayer accepting Christ into their heart. But 3-year-olds know nothing of discipleship, and unless they are taught discipleship later in life when they can truly understand what it means, they will never become true disciples of Christ, which is what a Christian is. Thus, sadly, many say a sinner’s prayer by age seven, but they continue following self rather than Christ. And by the time they reach 17, nothing has changed.

1. The kingdom of heaven on earth

Will the Anabaptists survive?

In the 16th and 17th centuries, the Catholic- and Protestant-controlled governments in Europe turned against the Anabaptists and persecuted them with terrible cruelty. Despite the horrible persecution, Anabaptists maintained their beliefs and multiplied. We are grateful that the Protestants no longer persecute us and are rather apologizing for their forefathers’ persecution. Anabaptists need to stay on the alert, however, so they do not now unconsciously and gradually surrender their beliefs during this time of geniality. The issues for which the Anabaptists were persecuted have not been resolved. We made it through the physical persecution. How are we doing in the face of the subtle onslaught of Evangelical books and media?

I do not wish to present the Anabaptists as “having it all together.” We certainly have quite a few problems of our own. Wherever we are right, it is by the grace of God. I also do not want to present Evangelicals as being all wrong. As I said at the beginning, we have some things in common. Many of them, despite their embrace of what I believe to be wrong doctrines, are sincerely seeking God and striving to do His will. I do think it is important, though, that people understand that there are significant differences which go deeper than dress and nonresistance, and which make Anabaptist churches necessary.

Furthermore, I call us all to grow in grace and in the knowledge of Jesus Christ while living up to the light we have already received. ~

Nolan C. Martin attends Lichty’s Mennonite Church near Narvon, PA. He originally wrote the above as a three-part response to some questions on an online forum. These were later put together and published online, from which the above was taken and slightly edited. While the above article in no way claims to thoroughly expound the fundamental difference between Anabaptism and Protestantism, it does outline some core distinctions that we would all do well to ponder. Note that all the footnotes are by The Heartbeat of the Remnant.

[1] In other words, God can declare the sinner righteous because he has now been made righteous (justified) by an infusion of the Holy Ghost in his heart, changing his character. The official theological term for this is called ontological justification. “Ontological” means “being” or “reality.” “Ontological justification” is being actually changed in character from an unjust person to a just person.

[2] Sin is not imputed where there is no law. Children sin, but until they understand the law their sins are not counted against them.

[3] By serving in politics and/or the military or police force.