“For I know him, that he will command his children and his household after him, and they shall keep the way of the LORD, to do justice and judgment; that the LORD may bring upon Abraham that which he hath spoken of him.” Genesis 18:19

There are three things very remarkable in this verse. 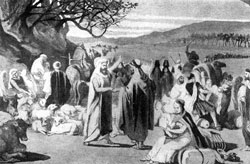 1. That Abraham used parental authority in governing his family: “For I know him, that he will command his children and his household after him.” He did not think it enough to pray for them, or to teach them, but he used the authority which God had given him—he commanded them.

2. That he cared for his servants as well as his children. In Genesis 14:14, we learn that Abraham had three hundred and eighteen servants born in his house. He lived after the manner of patriarchal times; as the Arabs of the wilderness do to this day. His family was very large, and yet he did not say, “They are none of mine.” He commanded his children and his household.

3. His success: “they shall keep the way of the LORD.” It is often said that the children of good men turn out ill. Well, here is a good man, and a good man doing his duty by his children—and here is the result. His son Isaac was probably a child of God from his earliest years. There is every mark of it in his life. And what a delightful specimen of a believing, prayerful servant was Eliezer! (Gen. 24.)

It is the duty of all believers to rule their houses well.

The Spring Of This Duty 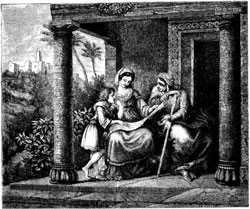 1. Love to souls. As long as a man does not care for his own soul, he does not care for the souls of others. He can see his wife and children living in sin, going down to hell—he does not care. He does not care for missions—gives nothing to support missionaries. But the moment a man’s eyes are opened to the value of his own soul, that moment does he begin to care for the souls of others. From that moment does he love the missionary cause. He willingly spares a little to send the Gospel to the Jew and the perishing Hindus. Again, he begins to care for the Church at home—for his neighbors—all living in sin. Like the maniac at Decapolis, he publishes the name of Jesus wherever he goes. And now he begins to care for his own house. He commands his children and his household after him. How is it with you? Do you rule well your own house? Do you worship God, morning and evening, in your family? Do you deal with your children and servants touching their conversion? If not, you do not love their souls. And the reason is, you do not love your own. You may make what outward profession you please; you may sit down at sacrament, and talk about your feelings, but if you do not labour for the conversion of your children, it is all a lie. If you but felt the preciousness of Christ, you could not look upon their faces without a heart-breaking desire that they might be saved. Thus, Rahab, Joshua 2:13.

2. Desire to use all talents for Christ. When a man comes to Christ, he feels he is not his own. (1 Corinthians 6:19-20) He hears Christ say: “Occupy till I come.” If he be a rich man, he uses all for Christ, like Gaius. If a learned man, he spends all for Christ, like Paul. Now, parental authority is one talent—the authority of a master is another talent, for the use of which men will be judged. He uses these also for Christ. He commands his children and his household after him. How is it with you? Do you use these talents for Christ? If not, you have never given yourself away to him—you are not his.

Scripture Examples Of It

1. Abraham. The most eminent example of it—the father of all believers. Are you a child of Abraham? Then walk in his steps in this. Wherever Abraham went, he built an altar to the Lord.

2. Job. Upon every one of his son’s birthdays Job offered sacrifice, according to the number of them all. (Job 1:5)

4. Eunice. From a child, little Timothy knew the Scriptures; and the reason for this you understand, when you read of the faith of his mother Eunice. (2 Timothy 3:15, 1:5) Such was the manner in Scotland in the days of our fathers; and if ever we are to see Scotland again a garden of the Lord, it must be by the reviving of family government.

The Manner Of It

1. Worship God in your family. If you do not worship God in your family, you are living in positive sin; you may be quite sure you do not care for the souls of your family. If you neglected to spread a meal for your children to eat, would it not be said that you did not care for their bodies? And if you do not lead your children and servants to the green pastures of God’s Word, and to seek the living water, how plain is it that you do not care for their souls! Do it regularly, morning and evening. It is more needful than your daily food—more needful than your work. How vain and silly all your excuses will appear, when you look back from hell! Do it fully. Some clip off the psalm, and some the reading of the Word; and so the worship of God is reduced to a mockery. Do it in a spiritual, lively manner. Go to it as to a well of salvation. There is, perhaps, no mean of grace more blessed. Let all your family be present without fail—let none be awanting.

2. Command—use parental authority. How awfully did God avenge it upon Eli, “because his sons made themselves vile, and he restrained them not”! Eli was a good man, and a holy man; and often he spoke to his two wicked sons, but they heeded not. But herein he failed—he did not use his parental authority—he did not restrain them. Remember Eli. It is not enough to pray for your children, and to pray with them, and to warn them; but you must restrain them. Restrain them with cords of love. From wicked books—from wicked companions—from wicked amusements—from untimely hours, restrain them.

3. Command servants as well as children. So did Abraham. Remember you are in the place of a father to your servants. They are come under your roof; and they have a claim on your instructions. If they minister to you in carnal things, it is but fair that you minister to them in spiritual things. You have drawn them away from under the parental roof, and it is your part to see that they do not lose by it. Oh! what a mass of sin would be prevented, if masters would care for their servants’ souls.

4. Deal with each as to the conversion of his soul. I have known many dear Christian parents who have been singularly neglectful in this particular. They worship God in the family, and pray earnestly in secret for their children and servants, and yet never deal with them as to their conversion. Satan spreads a kind of false modesty among parents, that they will not inquire of their little ones, Have you found the Lord, or no? Ah! how sinful and foolish this will appear in eternity. If you should see some of your children or servants in hell—all because you did not speak to them in private—how would you look? Begin tonight. Take them aside and ask, What has God done for your soul?

5. Lead a holy life before them. If all your religion is on your tongue, your children and servants will soon find out your hypocrisy.

The Blessing Which Follows The Performing Of It

1. You will avoid the curse. You will avoid Eli’s curse. Eli was a child of God, and yet he suffered much on account of his unfaithfulness. He lost his two sons in one day. If you would avoid Eli’s curse, avoid Eli’s sin. “Pour out thy fury upon the heathen that know thee not, and upon the families that call not on thy name:” (Jeremiah 10:25.) If you do not worship God in your house, a curse is written over your door. If I could mark the dwellings in this town where there is no family prayer—these are the spots where the curse of God is ready to fall. These houses are over hell.

2. Your children will be saved. So it was with Abraham. His dear son Isaac was saved. What became of Ishmael I do not know. Only I remember his fervent cry: “O that Ishmael might live before thee!” Such is the promise: “Train up a child in the way he should go, and when he is old he will not depart from it.” Ah! who can tell the blessedness of being the saved father of a saved family? Dear believers, be wise. Surely if anything could mar the joy of heaven, it would be to see your children lost through your neglect. Dear unconverted souls, if one pang can be more bitter than another in hell, it will be to hear your children say: “Father, mother, you brought me here.”