Written by Mike Atnip on 01 February 2010. Posted in Book reviews.

Will the Theologians Please Sit Down.

Imagine a sizable group of neighborhood bullies gathered in the shadows of a dark alley, just “hanging out” and practicing their aim by throwing big rocks at an empty dumpster. Bang! Crash!

The neighbors are irked, but none dare stick his head out the window to tell the troublemakers to be respectable and let everyone rest in peace. No, those bullies would probably chuck a rock or two at the window from whence the voice came. 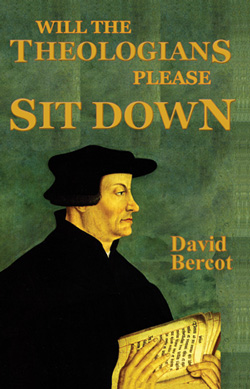 Suddenly, a squat, slightly balding old man steps into the alley. Sizing up the situation, he calmly walks up to the gang of bullies, and with a firm but calm voice, commands them: “Sit down, boys! You need to learn a few things.”

The daunting courage of the old man throws them off guard for a few seconds, but on recovering they look at each other with quirky smiles. One of them takes a step forward and spats out, “And just who do you think you are to tell us what …”

His voice abruptly breaks off as the old man grabs him by the shoulders, picks him off his feet, and sits him down with a plop on the pavement. Thoroughly shaken by the strange turn of events, the rest of the bullies stare blankly. But the old man is not through. “Did you hear me? I said sit down!”

When their obedience still does not manifest itself promptly, the invader calmly grabs another punk and repeats his former actions. Realizing by now that the old man means business, the rest meekly take their seats.

Meet David Bercot, the brave “old man” who sits the bullies down in his latest book—aptly titled—Will the Theologians Please Sit Down.

Bercot actually titles one of the chapters Learning to Stand up to Theological Bullies. With a righteous passion that springs from a deep love for the children of the kingdom, Bercot says:

In the end, the theological bullies have largely had their way. From what I’ve observed, we kingdom Christians often are weak when it comes to evangelism. That’s because “keeping quiet” has been deeply etched into our collective psyche. We’ve thrown out the bulk of our forefather’s teachings and replaced them with the doctrines of those who have bullied us. When a person reads the typical doctrinal textbooks of today’s Anabaptists, Moravians, Brethren, and other kingdom Christians, he or she finds that they basically teach the doctrines of Athanasius, Augustine, Luther, and Calvin—with mere additions of nonresistance, free will, and the head covering.

Do you grasp now what I said about Bercot being the brave “old man”? How many folks will stand up to such “big-name” theologians like Augustine, Luther, and Calvin? How many will walk up to them and say calmly but firmly, “Will you please sit down?” Inferring, of course … and be quiet!

Bercot begins his book by introducing a new word in the title of the first chapter, doctrianity. But instead of defining the term in a typical dictionary method, he tells the true story of Caspar Zacher, a man accused of being a heretic. This was in 1562 in Europe, which means that if he is found guilty, he will certainly die for his crime.

Caspar denies being a heretic. Declaring himself to be a good Lutheran, he emphatically declares that he has nothing to do with those Anabaptists. When his neighbors begin testifying, Caspar gets nervous; they tell how he is an envious man, quarrelsome, a swearer and a curser who nearly always carries a knife with him.

But to Caspar’s great relief, he is declared innocent. The judge explains:

The witnesses are uniform in testifying that you are an envious and quarrelsome man. You frequently curse in public, and you go about town carrying weapons. You are a thoroughly disagreeable man, justly hated by your fellow townsmen. But, fortunately, you are obviously not one of those detestable heretics, the Anabaptists. For the life you live is exactly opposite theirs. They would never have you. You are just as you say, an orthodox Christian.

In other words, Christianity had been transformed from a religion centered on bearing good fruits to one centered on believing the right things—the doctrines promoted by the “theological elite.” Bercot makes it clear that good doctrine is necessary; that is, the simple teachings of Jesus. As an example, Bercot quotes Tertullian’s (2nd-century) “statement of faith.” In fact, he includes the whole statement … all 63 words of it! He then notes that the Westminster Confession of Faith, published by the Puritans of the 17th century, contains 12,079 words. In another place, he mentions John Calvin’s Institutes of the Christian Religion, comprised of at least ten volumes.

But it is not just the mass of words, rather it is the whole shift in emphasis—from bearing fruit to believing right—that stirs the heart of the author. Beginning with the second century, Bercot traces the development of sophisticated theology. Starting with Origen, who unwittingly got the ball rolling, he then looks a bit at the details of the Council of Nicaea. Instead of heeding the advice of one old wise bishop to “just drop it,” the Christian church by and large became embroiled in a large theological debate about a matter on which the Bible itself was silent. Next came excommunications, then exiles, and eventually shedding of blood as one side then the other built a position around their doctrinal belief. To their disgrace, they—quoting Bercot—“gutted the Sermon on the Mount” so as to defend their “doctrianity.”

From the 4th century on, the bulk of those people claiming to be Christians followed the teachings of the “theological elite.” There were always a few who clung faithfully to the simple New Testament teachings, but doctrianity became the rule of thumb.

Along came Martin Luther and John Calvin. Seeing some of the errors of Catholicism, these men began to make reforms. But …

Sad to say, instead of returning back to Christianity, they only reformed doctrianity. At this point in the story, Bercot focuses for a couple of chapters on this grave mistake. The Protestant reformers reformed the doctrinal lines, but failed to revive simple, primitive Christianity. Following on their heels, many commentators and subsequent theologians have simply repeated what they learned from Calvin and Luther. Bercot uses for an example the slightly twisted interpretation that John Calvin gave of 1 Corinthians 11. He then lays before the reader seven examples from popular commentaries on the same chapter, each of them basically perpetuating Calvin’s error.

From there, the author leads the reader into some examples of how twisted historical ideas get perpetuated as fact. He also touches on how the theological bullies push their way, many times intimidating the common man by his knowledge of Greek and his supposed access to little-known information from Jewish Rabbis, which gives him an edge over—so he thinks—the simple reader of Jesus’ words.

Winding down his story, Bercot comes back to his main point: bearing kingdom fruit vs. believing right. Knowledge is not fruit. One can know all sorts of correct things about God. He can even pretend to know more about God than what the Bible actually tells us. But the bottom line on Judgment Day is not going to be about what we believed, but about how much fruit we bore while on planet earth.

Perhaps you may be wondering, “If Bercot seems so intent on tearing down popular theology, just what theology is he promoting?” Actually, if you are looking for a book that expounds correct Christian theology, this one will be a disappointment to you. While the author does bring out a few examples of false theology and poor hermeneutics, he really doesn’t seem intent on making you believe this or that. His point is … well, let me say it this way:

Imagine Jesus sitting on a Galilean hillside, amidst a group of noisy theologians disputing about correct soteriology. David Bercot enters the scene, and begins to ask all the theologians to just sit down. After asking them to—or making them—take a seat, he does not step up on a rock to set everyone straight on the proper view of salvation. Instead, he also meekly takes a seat at the feet of the Teacher.

The Teacher, once the group has quieted down, begins His class by saying, “Welcome to Soteriology 101. Today we are going to do a thorough review as to how a person gets saved.”

Then, standing to His feet, the Teacher looks around at the students and says, “Follow Me.” With that, He turns on His heels and walks away, heading for the closest village to spend the day visiting the sick, speaking kind words to the weary, visiting those in prison, and offering hope to the downtrodden.

If the above scene rings true to you and a “Hallellujah!” erupts from your soul, Will the Theologians Please Sit Down will be a fresh breath of air for you. If the scene I just described leaves you a bit bewildered or maybe a tad angry for taking such a “light” view of salvation—or perhaps seems to be outright heretical—then Will the Theologians Please Sit Down is even more so a “must read” for you.

I end this book review with the final words of the last chapter: